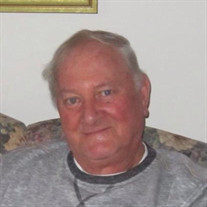 Radford (Rad) L. Comer, aka Pops, age 82, of North Ridgeville passed away on Wednesday, December 9, 2020 at the University Hospital Elyria Medical Center after a brief battle with Covid. He was born on May 30, 1938 in Clay County, West Virginia and has been a resident of North Ridgeville for the past 48 years. He retired from General Motors in 1998 after 35 years of service and was a member of the Christian Unity Church in Eaton Township. Rad was an avid swimmer and a welcome visitor to his daughter's pool almost every day during the Summers. He also enjoyed playing "his numbers" every day at the local grocery store where he was referred to as Pops by the entire staff. Rad would never turn down a game of Rummy, but more than anything else, he just enjoyed spending time with his family. Whether it be on his front porch, a cookout, or just sitting around the kitchen table talking and laughing, Rad cherished those moments more than anything else. He is survived by his wife of 62 years, Ella Faye; children Rhonda (Joe) Bridle of North Ridgeville; Rob Comer of Amherst and Ranee (Matt) Copen of Amherst; daughter-in-law Roseann Comer of Elyria; grandchildren Nathan (Jamie) Milstead, John M. Commarano, Zach Bridle, Renee Comer, Rochelle Layton, Chase Comer, Ryan Vayda, Brieana Spanos, Robbie Comer, Austin Copen and Rylan Copen; great grandchildren Luke and Jacob Milstead, Rhysen, Raine, Russell, Randye, Rosie Comer, Maddie and Carter Vayda, Ava Spanos, Paxton Layton and Riley Comer; brothers Robert and Ralph Comer; sister Redith Harmon; many nieces and nephews. Radford was preceded in death by his beloved son Randy Comer; and his parents Roma and Velva (nee Lane) Comer. All services will be private but will be live streamed on the Bogner Family Funeral Home Facebook page Saturday, December 12, at 5:00 p.m.

Radford (Rad) L. Comer, aka Pops, age 82, of North Ridgeville passed away on Wednesday, December 9, 2020 at the University Hospital Elyria Medical Center after a brief battle with Covid. He was born on May 30, 1938 in Clay County, West Virginia... View Obituary & Service Information

The family of Radford L. Comer created this Life Tributes page to make it easy to share your memories.

Send flowers to the Comer family.