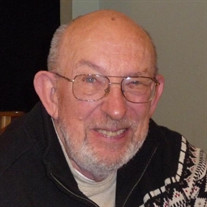 Paul C. Winslow Jr., age 86, of North Ridgeville, passed away Monday, April 20, 2020 at UH St. John Medical Center. He was born on December 7, 1933 in Pittsburgh and had been a resident of northeastern Ohio for 60 years, raising his family in North Olmsted later moving to North Ridgeville. He was in the US Army, worked as a mechanical engineer for NASA Glenn Research Center and was a member of St. Richard and St. Peter Catholic Churches. Impossible was not a word in Paul's vocabulary. Even a devastating stroke at age 40 couldn't slow him down. He was the ultimate do-it yourselfer who enjoyed camping, driving to the lake and Metroparks and spending time with his large family. He will always be remembered for his love, generosity, family values, intellect and determination. He is survived by his wife of 61 years Rita (nee Konrach); children Paula (Don) Ancona of Albuquerque, NM, David (Sue) Winslow of Lawrenceville, GA, Brian (Carrie) Winslow of Hockessin, DE, Janet (Jim) Leopold of Elyria, Laura (Carl) Artino of North Ridgeville; grandchildren Anthony, Cheryl, Vince, Emily, Amanda, Veronica, Victoria, James, Evan, Rebecca, Jeffrey, Carl, Jonathan and Elise; great-grandchildren David and Samuel; brothers Vincent (Peggy) of Shaker Hts., John (Susan) of Mentor, Michael (Bernadette) of Hagerstown, MD.; and many nieces, nephews and cousins. He is preceded in death by his parents Paul Sr. and Veronica Winslow; and sisters Geraldine Achin and Susan Winslow. A private memorial mass will be at 10 AM Saturday, April 25, 2020 streamed live on the Facebook page of Bogner Family Funeral Home. Burial at Holy Cross Cemetery at a later date. Memorial contributions can be made to O’Neill Healthcare Scholarship Fund www.oneillhc.com/scholarshipfund, or UH COVID-19 Caregiver Support Fund www.support.uhgiving.org/site/Donation2?df_id=2362&mfc_pref=T&2362.donation=form1 For more information or to leave an online condolence please visit www.bognerfamilyfuneralhome.com

Paul C. Winslow Jr., age 86, of North Ridgeville, passed away Monday, April 20, 2020 at UH St. John Medical Center. He was born on December 7, 1933 in Pittsburgh and had been a resident of northeastern Ohio for 60 years, raising his family in... View Obituary & Service Information

The family of Paul C. Winslow Jr. created this Life Tributes page to make it easy to share your memories.

Send flowers to the Winslow family.