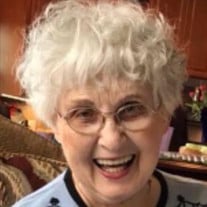 Margaret T. Hujo (nee Frolo), 94 of North Ridgeville passed away peacefully on December 30, 2019 at Ames Family Hospice in Westlake. Born on April 2, 1925 to Joseph and Mary (nee Utrata) Frolo in Lakewood Ohio. Margaret was a simple person and an extraordinary woman all at the same time. She was part of the Greatest Generation that volunteered to serve in WW II as a member of the US Cadet Nurse Corps earning a Nursing Degree from St. John’s Hospital School of Nursing in 1947. Later that same year she married her sweetheart Stephen who had recently returned from active duty serving in the South Pacific as a Marine; they remained married for more than 65 years. Margaret and Stephen eventually settled in North Ridgeville in the early 1950’s where they raised 8 children as active members of St. Peters Church. Her life was marked by great joy, great determination, great loss, and great empathy. She worked as a RN throughout her life initially for Elyria Memorial Hospital in the OB department for more than 20 years before continuing her career in Nursing Homes helping the aged. She volunteered throughout her life and helped create and support such groups as the Little Flower Mission Circle, Mothers Club, and Red Hats. She counseled and cared for new mothers, the sick and infirmed, and supported Gold Star Mothers during the Vietnam War. She was a woman of deep faith and conviction and led prayer groups wherever and whenever she could. She deeply loved her family and enjoyed supporting her children as a den mother, coach and confident. She enjoyed gardening, baking, and traveling and was an enduring example of a working mother who gave all that she had in faith, love and compassion. Margaret was preceded in death by her beloved husband Stephen; eldest son Stephen; parents and 4 siblings. She will be forever cherished by her sister Ruthanne Platek; children – Michael (Nit), Robert (Brenda), Joseph, Kathleen (Duane) Jarvis, Timothy, George (Denise), and Jeffrey (Ellen); her 14 grandchildren and 11 great grandchildren as well as a multitude of nieces and nephews. Friends may call Friday from 4-7PM at the Bogner Family Funeral Home, 36625 Center Ridge Rd., North Ridgeville. A prayer service will be held on Saturday at 11AM in the funeral home followed by a 11:30AM Mass at St. Peter Catholic Church, 35777 Center Ridge Rd. Rev. Bob Franco, Pastor, will be the celebrant. Burial will follow at St. Peter’s Cemetery. Memorials are suggested to St. Augustine Church, 2486 West 14th St., Cleveland 44113 or St. Malachi Parish, 2459 Washington Ave., Cleveland 44113

The family of Margaret T. Hujo created this Life Tributes page to make it easy to share your memories.

Send flowers to the Hujo family.