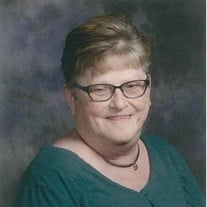 Judyan Moore (nee Knapmeyer), age 76, of Elyria, passed away on Friday, January 10, 2020 at University Hospitals Elyria Memorial Hospital. She was born on August 31, 1943 in Cincinnati and has been a resident of Elyria for the past 11 years, moving from Grafton where she had lived for 32 years. Judyan worked as a preschool teacher for Kinder Care in Elyria, where many of her students became her “adopted grandchildren.” Early in her career, she worked as a nurse’s aide for the Shangri La Nursing Home in Medina followed by home health care. Judyan also volunteered as a Guardian ad Litem for the courts, protecting and looking out for the children who were in her charges. She loved the ocean, and all its creatures, and her vacations revolved around it. She had a love of all wildlife and this was highlighted with a trip to the Vince Shute Wildlife Sanctuary where she walked among wild bears. Her true joy in life was found in her grandchildren, and she took each of them on Senior trips, including Alaska and Hawaii. Judyan is survived by her sons Russ (Julie) Moore of Poplar Grove, IL, Todd Moore of Harrison, Ohio and Craig Moore of Bellbrook, Ohio; grandchildren Nathanael (Dana) Stenger, Megan (Jereme) Korpel-Zinz, and Patrick, Kathleen and Sarah Moore; great grandchildren Elise and Ava Stenger and Olivia Korpel-Zinz; brother Terry (Linda) Knapmeyer; many nieces and nephews. She was preceded in death by her husband Donald E. Moore; parents Harvey and Mary Margaret “Peggy” (nee Wentworth) Knapmeyer. Memorial Service Thursday, January 16 at 6:00 p.m. in the Bogner Family Funeral Home, 36625 Center Ridge Rd., N. Ridgeville, where family will receive friends from 5:00 p.m. until time of service. Rev. Charles Ryba will officiate. In lieu of flowers, the family requests donations be made to Elizabeth Ann Seton Church, 25801 Royalton Rd, Columbia Station, 44028 or the Friendship APL, 8303 Murray Ridge Rd., Elyria, Ohio 44035.

Judyan Moore (nee Knapmeyer), age 76, of Elyria, passed away on Friday, January 10, 2020 at University Hospitals Elyria Memorial Hospital. She was born on August 31, 1943 in Cincinnati and has been a resident of Elyria for the past 11 years,... View Obituary & Service Information

The family of Judyan Moore created this Life Tributes page to make it easy to share your memories.

Send flowers to the Moore family.