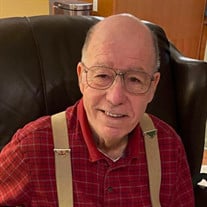 Donald G. Westenhofer, age 78, of North Ridgeville passed away Saturday February 6, 2021 at UH St. John Medical Center, Westlake. Born in White Plains, NY he had resided in Brookfield, CT for over 40 years before moving to North Ridgeville, OH in 2006. He served in the US Marine Reserves. He was a certified Professional Engineer, specializing in sprinkler and fire protection until retiring in 2007. Donald had a passion for sports, and especially enjoyed watching his grandchildren play. He volunteered as a Pack Leader for Cub Scouts and was a very involved parent. He also enjoyed golfing, bowling and boating. Donald was civically engaged and served on the Board of Zoning and Appeals in Brookfield for 20 years. He was beloved by all who met him and was as at ease with a stranger as with a life-long best friend. Survivors include his wife of 54 years, Anneliese “Adi” (nee Grable), children, Bill (Gabrielle) Westenhofer of Glendale, CA, Kim (Brad) Mitcheltree of Hudson, OH and Scott (Deena) Westenhofer of Bristow, VA, grandchildren Christopher, Kathleen, Ryan, Thomas, Zach, and Mason, and his brother, Robert Westenhofer of Scottsdale, AZ. He was preceded in death by his parents, George and Edna Westenhofer, and grandson Owen Wicks. A celebration of Donald’s life will be held at a later date. In lieu of flowers, memorial contributions are suggested to ALS Association www.als.org

The family of Donald G. Westenhofer created this Life Tributes page to make it easy to share your memories.

Send flowers to the Westenhofer family.