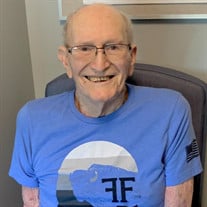 William P. Thomas passed away at the age of 93 September 15th after a blessed and happy life. Bill loved the outdoors. He spent every moment he could outside enjoying the grandeur of God’s gifts of nature around him. His grew up in Cleveland but his happiest days were spent with his wife, Mary Ann, on their small farm in Sigel, Penn. He was fortunate enough to retire at 56 and he and Mary Ann shared the next 18 years on the farm before moving back to Ohio. No one enjoyed the blessing of outdoors and being one with nature more than Bill. Bill was also a devoted Catholic and faithfully practiced his religion throughout his life. His admiration for EWTN was something the family often smiled about. In the last years, it was on continuously whenever anyone visited him. Most of all Bill loved his family. He was proud of every one of their accomplishments. His family admired his complete devotion to his wife through all the years she suffered from Alzheimer’s. Bill visited her daily and fed and cared for her patiently. His loving care for her, especially the last 4 years when she resided in a nursing home, made an impression on his family and touched the hearts of all he came across in the nursing home. Bill was always a man with a ready smile. Bill served in the Army. His career after the service was at CCC Trucking doing the payroll Bill is survived by his sons James [Darla] of Washington, John of Cleveland and stepchildren Wendy [Bill] Sikora, Pam Butler [Charles Gasper], Tim [Karen], David [Lea Gorican], Michael [Kerry], Stacy [Bob] Penn, Tom [Amy], Beth [Joe] Galea, stepdaughter in law Joanne [Daniel] Herdmann and many grandchildren and great grandchildren. He is preceded in death by his wife of 30 years, Mary Ann, his parents Cecelia and Louis Thomas and his siter Patricia Thomas, His stepchildren Cathi Herdmann and Daniel [Joanne] Herdmann. Memorial Mass, Thursday, September 23 at 10:00 a.m. at St. Peter Church, 35777 Center Ridge Rd., North Ridgeville, where family will receive friends from 9:30 a.m. until time of Mass. Rev. Joe Robinson will officiate. Inurnment with Full Military Honors will follow at Holy Cross Cemetery, Brook Park. In lieu of flowers donations may be made to Hospice of the Western Reserve Development Office PO BOX 72101, Cleveland, Ohio 44192, [email protected] “Well done my good and faithful servant.” Matt. 25:21

William P. Thomas passed away at the age of 93 September 15th after a blessed and happy life. Bill loved the outdoors. He spent every moment he could outside enjoying the grandeur of God&#8217;s gifts of nature around him. His grew up in Cleveland... View Obituary & Service Information

The family of William Paul Thomas created this Life Tributes page to make it easy to share your memories.

William P. Thomas passed away at the age of 93 September 15th...