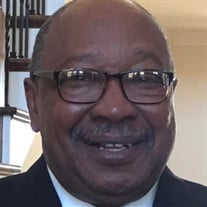 William Harold Oden, age 78, of North Ridgeville where he resided with his lovely wife, Celeste for 29 years, passed away on Saturday, March 7, 2020, at the St. John Medical Center in Westlake, Ohio. William was born in Clanton, Alabama on May 17,1941 to the proud parents of John H. Oden and Sylvia Singletery Oden. William was the second (but the first son) of nine children born to this union. He was a precocious child, having developed proclivities toward the street life, giving mom and dad early training about how to be stern parents, but of course, everyone survived. Then came school days at Kinsman Elementary School, middle school at Rawlings Junior High, located in what was known as Garden Valley, and later attending East Technical High School (fondly known as East Tech), where he developed a love for reading. Bored with high school and along with the encouragement of his father, Will joined the U. S. Army, was stationed in Germany, served two years, and earned an honorable discharge at the end of his service. In 1963, and after returning home from Germany, Will landed a job at Ford Motor Company in Brookpark, Ohio, starting off as a laborer, working in what Ford refers to as “the Foundry.” Later, Will became a clerk for the Department of Material and Handling in Engine Plant #2, and then Supervisor of the Department, where he worked until his retirement in 2003, after 40 years of service. In his free time, William enjoyed reading, especially mysteries, working crossword puzzles, and cooking, which he did for his wife, Celeste, nearly every day. The summer months would find William tending to his garden, doing yard work, or lounging by his pool with his children and grandchildren. When anyone speaks about William, you hear the same reverence. Will was fair, respected, kind, reliable, a jack-of-all-trades, intelligent, avid reader, caring, family man, and a little stubborn. But then, on a beautiful, sunny, Saturday afternoon, God called William’s name. “Come,” He said, and “I’ll give you rest,” and Will graciously took His hand. William H. Oden leaves to mourn his lovely and faithful wife, Celeste McDaniel Oden, who remained by his side for 29 years., along with their children, Darryl (Anita) Oden; Kathy Woods Oden (George Woods, deceased); Marc (Anita) Oden, all from a previous marriage to Madelyn Smith (deceased); stepdaughters, Rachel Cyphert Mercer (Ron); Sherry Cyphert, and Melissa Cyphert; 15 grandchildren, 40 great-grandchildren, and 1 great-great grandchild; siblings, Robin Oden (Freda); Bruce Oden, Phyllis Oden Thomas, and Sylvia Thompson (John Wayne). Will was preceded in death by his parents, John and Sylvia Singletery Oden, and four siblings, Judy Ruth Oden Bradford, Johnny H. Oden, Jerry Oden, and Phillip M. Oden, along with a host of other relatives and friends. Will, your strength, tenacity, virility, stubbornness, and stability will help us think of you often and love you forever. RIP A private memorial service for the immediate family only will be held, but will live streamed 11:30 AM Thursday January 14, 2021 on Bogner Family Funeral Home Facebook page. Rev. Jeric Thomas, Bill's nephew will officiate. A committal service will military honors will be 2:00 PM Thursday January 14, 2021 at Ohio Western Reserve National Cemetery, Rittman.

William Harold Oden, age 78, of North Ridgeville where he resided with his lovely wife, Celeste for 29 years, passed away on Saturday, March 7, 2020, at the St. John Medical Center in Westlake, Ohio. William was born in Clanton, Alabama... View Obituary & Service Information

The family of William H. "Bill" Oden-Change of Services created this Life Tributes page to make it easy to share your memories.

William Harold Oden, age 78, of North Ridgeville where he resided...

Send flowers to the Oden-Change of Services family.