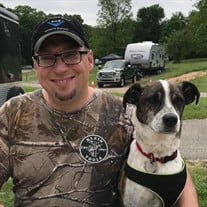 Thomas Charles “Tommy” Bond, age 40, of Worthington, Ohio, passed away at his home on Friday, April 22, 2022. Born on May 2, 1981 in Cleveland, Ohio, he grew up in Brunswick Ohio, where he graduated Class of 1999 after studying machining technology at the Medina County JVS. He later went on to earn a bachelor's degree in Information Systems from Kent State University. After college, he moved to Blacksburg, Virginia, where he worked for Aegisound, designing custom ear plugs for the military. He later moved to Gettysburg, Pennsylvania, where he worked for The Joseph Company, travelling the country to fix machines on window assembly lines. After relocating to Columbus, Ohio, last year, he began working as an engineer at the BriskHeat Corporation. Tommy was a tinkerer, and loved taking things apart and putting them back together. He could fix just about anything, a genius with engineering and electronics. Using parts from multiple cars he rebuilt a 1982 Porsche 911, a project of which he was tremendously proud. For his mother, he built a golf cart from the ground up to use at the Mohican campground where he spent a great deal of time with family and friends; it was one of his most favorite places. At an early age, Tom developed an interest in CB Radios, where he was known by the handle “Joker.” He looked forward to Friday and Saturday nights playing "cat and mouse" around Brunswick with his friends "blkranger", "little squeaker", "gueto", and "easy rider". As a lifetime Boy Scout, he loved being outdoors, shooting, riding his four-wheeler, camping, and as a teenager working at the Loudonville Canoe Livery every summer. He loved to travel, did so extensively throughout the world and found a special affinity for Canada. Tommy is survived by his spouse Caitlin; one daughter; mother Sheila Bond of Avon Lake; father Thomas (Laurinda) Bond of Elyria; sisters Sarah Bond of Beachwood and Katie (Justin) Gould of Avon Lake; nieces Gwendolyn and Hannah Gould of Avon Lake; many aunts, uncles and cousins; lifelong friends Brian Phelan and Brad Urban. He was preceded in death by his maternal grandparents Louis and Edith Kulcsar; paternal grandparents Charles and Janet Bond; great grandmother Katie Bond. Funeral Service Thursday, April 28 at 8:00 p.m. in the Bogner Family Funeral Home, 36625 Center Ridge Road, North Ridgeville, where family will receive friends from 4:00 p.m. until time of service. Rev. Vincent Hawke will officiate. Interment will be private.

The family of Thomas Charles "Tommy" Bond created this Life Tributes page to make it easy to share your memories.

Send flowers to the Bond family.