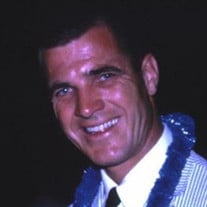 Richard Castle Smith, born December 18, 1933 in Cleveland Ohio died peacefully in his sleep Wednesday August 25, 2021. Beloved husband of 66 years to Lois (nee Miller), father of Kevin Smith (Carol), Jeffrey Smith (Anne), Julie Karasek (Doug), Suzy Cookson (Tim), Sally Smith (Patrick Dowling), Margaret Bay (Bryant), Matthew Smith (Rosemary), David Smith (Sara), 15 grandchildren, 4 great-grandchildren, numerous nieces and nephews. He was preceded in death by his son Timothy and granddaughter Amy Stacks. Son of the Late George D. Smith Sr. and Irene M. Smith (nee Castle). Dear brother of Kathleen Hummel and the late George D. Smith Jr. and Robert Smith. Richard grew up on the east side of Cleveland in Garfield Hts. He graduated from St Tim’s Elementary and East Tech High School. He attended Kent State University from where he graduated in 1954. While there, he joined the Naval Reserve, fortunate in timing, the war ended before he was called to active duty in Korea. He was proud of his service and reminisced fondly of the training he received while in the Reserve. Kent State also gave him the good fortune to meet Lois Miller, she was the love of his life and wife of 66 years. They married in December, 1954 and quickly had 9 children in 11 years, raising them in Columbia Station. They enjoyed dances, theatre and traveled the world. They always made time for each other out of the chaos of a home with 9 children. Richard founded Designor Pools in 1964 and ran the company for over 30 years. He employed countless people, building hundreds of pools, private and commercial, all over the Midwest, Mexico and the Caribbean. In later years, he spoke at many industry events on design and other pool and water park issues. He took great pride in his work and the fun it gave others. He loved water parks, and fountains. His expression whenever he saw a towering fountain was “now that’s fun”. He had a great flair for showmanship that spilled over into everything he did, be it designing fountains, to hosting huge family gatherings…. must have live music, dancing, lots of food and drink. With 9 children to entertain, you have to be creative and fun; he was the master. He invented the family holiday “Corn Sunday”, always in August, with a corn roast and hoopla (we didn’t realize that wasn’t a “real” holiday until we entered school and we were the only ones celebrating). He built ice boats in the winter, created a “Dune truck” out of an old stake truck to Baja all over the place with us kids hanging on for dear life, the Christmas cookie decoration competition where he came up with categories so that everyone would win, Most Colorful, Best Personality, Most Creative, Scariest etc. The Fourth of July parties at our large house on East River Rd were epic, fireworks, games, hayrides, extended friends and family numbering close to a hundred. In addition to building swimming pools he and two partners founded and built Crystal Springs Swim Club in North Ridgeville. Many of our extended family celebrated their weddings there. He was active in his commitment to the Lorain County Board of Developmental Disabilities for many years. He was also a group leader and proud member of AA. To him, everything was possible; his motto was “Just Do It’, beating Nike by at least 20 years with that slogan. Many of us knew, we only needed to work half as hard as our father did because that meant we would be working at twice the speed of everyone else! He had charisma, optimism and a sense of fun that will be missed! The family would appreciate contributions in lieu of flowers in his memory to The Lorain County Board of Developmental Disabilities or to your local AA chapter. A Funeral Mass will celebrate his life on Saturday, September 4, 2021, at 11:00 am at St. Elizabeth Ann Seton Church, 26801 Royalton Road, Columbia Station, Ohio, where family will greet guests beginning 1 hour prior to the service. Please follow Covid protocol. If you are not vaccinated, please mask up. A Graveside service will be held on Saturday, October 2, 2021 at 10AM at Holy Cross Cemetery, Brook Park, where VFW Post 9871, North Ridgeville will conduct Military Honors.

The family of Richard C. Smith created this Life Tributes page to make it easy to share your memories.

Send flowers to the Smith family.