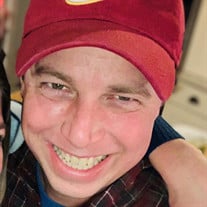 Michael Scott Thorne, age 42, passed away on Tuesday, July 20, 2021 at the Cleveland Clinic following a three year battle with cancer. Mike fought cancer the way he lived his life - on his own terms with courage and humor. Mike was preceded in death by his mother, Peggy Lee (Sima) Thorne. He is survived by his parents Ronald Thorne and Kathleen Sullivan-Thorne; his dearest sister Amy (Thorne) Hrouda and brother in law Tim Hrouda; his nephew Nicholas Hrouda and niece Allison Hrouda. He also had a large number of aunts, uncles, cousins and friends who will miss him deeply. In addition to his mother, Mike was preceded in death by his paternal grandparents, Sidney and Lillie (nee Kirchner) Thorne and maternal grandparents and Joe and Tillie (nee Platek) Sima. Mike was a life-long resident of North Ridgeville, Ohio, graduating high school in 1998. As a student, he especially loved the social piece of school and often entertained teachers and classmates with his love of practical jokes. Mike spent much of his time at school, including study hall periods, in the Industrial Arts department. Mike excelled in designing and creating projects in industrial arts eventually leading to his involvement in building North Ridgeville’s Safety Town. Additionally, Mike attended Lorain County Community College before graduating from Hamrick Truck Driving School, obtaining a Class A Commercial Driving License upon the first attempt. After high school, Mike worked for furniture delivery companies as a driver before most recently taking his creative talents to Nitelights of Cleveland, Inc. As a lead foreman, Mike installed decorative and security landscape lighting at homes and businesses while managing a crew. The company highly valued Mike’s commitment to strive for excellence, his attention to detail and his unique problem solving skills. Even during the most difficult times of his life, Mike thought of doing for others and continued to show up, even while battling cancer. Mike loved life. His favorite place to spend time was Castaway Harbor in Marblehead, Ohio. There he spent endless hours with family and friends camping, boating and fishing. Hanging out on Lake Erie, whether it be anchored at the sandbar, Cedar Point Beach, or the north side of Kelleys, was the perfect way to spend a summer day. Fish, pork, steak, chicken - you name it - were grilled all while consuming his favorite beverage. Mike could always be relied on to keep the campfire burning well into the wee hours of the morning! There were a wide range of other interests and hobbies Mike enjoyed. High on the list were building projects with his Dad, Brown’s games and tailgate parties, off-road bike riding, NASCAR, traveling, and all kinds of music - most especially Rush! He loved spending time with his nephew Nick and niece Kiki as well as children of friends who loved their “Uncle” Mike. Most recently, Mike began sharing his life with his canine companion Toby. From the moment they met,Toby and Mike knew they were supposed to be together. Toby helped Mike through some of his most challenging days with his love and devotion. Mike Thorne was a kind, loyal and loving son, brother, nephew, uncle, cousin and friend to many. He was always looking for ways to help and protect those he loved. He helped to bring out the best in everyone he met. Calling hours will be from 2 PM to 7 PM on Thursday, July 29th at the Bogner Funeral Home, 36625 Center Ridge Road, North Ridgeville, OH 44039. The funeral service will be at 10 AM on Friday, July 30th at Prince of Peace Lutheran Church, 28455 Center Ridge Road, Westlake, OH 44145. Internment will be at a private ceremony at a later date. Donations can be made to the American Cancer Society or Animal Protective League.

Michael Scott Thorne, age 42, passed away on Tuesday, July 20, 2021 at the Cleveland Clinic following a three year battle with cancer. Mike fought cancer the way he lived his life - on his own terms with courage and humor. Mike was preceded... View Obituary & Service Information

The family of Michael Scott Thorne created this Life Tributes page to make it easy to share your memories.

Send flowers to the Thorne family.