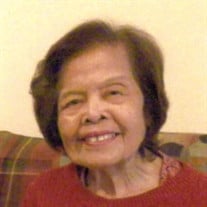 Luz V. Villanueva (nee Valdez), age 97, of North Ridgeville, passed away peacefully on Friday, October 8, 2021, at The Northridge Health Center in North Ridgeville. She was born on September 13, 1924 in Pasay City, Philippines, and emigrated to the United States in the 1980’s. She had been a resident of North Ridgeville since 2009, formerly residing in Los Angeles, CA. In the Philippines, Luz received her Bachelor of Arts degree in Education from Manuel L. Quezon University (Manila) in the 1950’s. She taught elementary school children for several years before pursuing a graduate degree abroad in the United States. She attended graduate school at St. John’s University in New York City, NY, where she earned a Master of Arts degree in English. Luz returned to the Philippines, where, for over 20 years she was a Professor of English Literature at University of the East (Manila). She married her college sweetheart, Maurice Villanueva, in 1963, and lived in Cubao, Quezon City, Philippines before they both retired and emigrated to Los Angeles, CA in the 1980’s. While in retirement in Los Angeles, Luz continued her work in education, teaching English as a Second Language at Los Angeles Community College while working at Great American Life Insurance Company. Throughout her life, Luz was a champion for education; her enthusiasm and encouragement for learning reached students of various ages as she and her sister, Maria (also a teacher) volunteered their retirement time at the Los Angeles Learning Center Foster Grandparent Program. Luz’s interest in leadership was seen through her Resident Council membership while she and Maria resided at Wilshire Christian Manor in Los Angeles, before relocating to Ohio. Luz was a voracious reader and had a keen sense of humor. She loved keeping in touch with current events locally and globally, and keeping up with her family members’ educational endeavors. As a 6-year resident of Northridge Health Center, Luz participated in daily activities and formed friendships with both fellow residents and staff. A devout Catholic, Luz made time for strengthening her relationship with God through daily prayers, especially the Rosary, and attending Masses offered at church and at Northridge Health Center. She was a member of St. Teresa of Avila Catholic Church, and enjoyed visits with members of the church’s Altar and Rosary Society and friends from the parish. She always appreciated being remembered in the church’s weekly bulletin. Luz is survived by her nieces Cecilia Cabanag (Eric Steffensen) of CA, Maria Cabanag Moscardini (Bill, deceased) of CA, Ernestine Cabanag (Phil Hanthorn) of NV, Rosalima Valdez Pham (Thuan) with whom she and sister Maria made their home in North Ridgeville; nephew Bernard Valdez of Elyria; numerous great nieces and nephews; cousins Orlando Alayu (Tessie) of CA and Maria Luisa Flores of CA. She was preceded in death by her husband, Maurice Villanueva; parents Baldomero P. Valdez and Francisca G. Alayu Valdez; brothers Baldomero Valdez, Jr. and Eduardo Valdez; sisters Maria Valdez, Rosita Valdez Cabanag; sister-in-law Teresita Reyes Valdez (Eduardo); brother-in-law Perfecto Cabanag (Rosita); nephew Edward Joseph Valdez. Family will receive friends Tuesday, October 12, 2021, from 5-8pm at Bogner Family Funeral Home, 36625 Center Ridge Rd., North Ridgeville where a prayer service will be held Wednesday at 9:30 am. Masks are required. Mass of Christian burial will follow at 10 am at St. Peter Catholic Church, North Ridgeville, and will be livestreamed on the St. Peter website at www.stpeternr.org or Saint Peter Catholic Church Facebook page. Rev Bob Franco will officiate. Burial will follow at St. Joseph Cemetery, Alliance, OH. (Meet at cemetery). For further information or to leave an online condolence, please visit www.bognerfamilyfuneralhome.com

The family of Luz V. Villanueva created this Life Tributes page to make it easy to share your memories.

Send flowers to the Villanueva family.