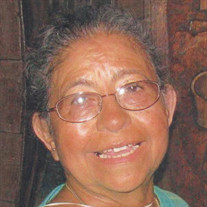 Luz Violeta Alvarez Lopez de Higgason died peacefully at home with her husband and daughter at her side on November 8, 2021, after a five-year struggle with Aphasia and Dementia. She passed a month after her Golden Anniversary and a mere 15... View Obituary & Service Information

The family of Luz V. Higgason created this Life Tributes page to make it easy to share your memories.

Send flowers to the Higgason family.