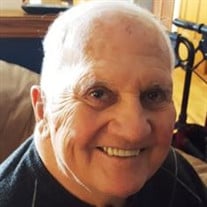 Lawrence (Larry) Fetcenko was born March 13, 1935 in Morris Township in Clearfield County, Pennsylvania to Mike Fetcenko and Mary (Verba) Fetcenko. He was the eighth child of ten siblings. He had a pleasant childhood in Pennsylvania and graduated from high school in 1958. He was drafted into the Army in 1958 and was stationed in Augsburg, Germany where he met his German bride to be, Elise (Mayer) Fetcenko at an Oktoberfest Fair. They were married on October 1, 1960. After living in various apartments in Elyria for the first five years of their marriage, Larry built a house for his young bride in North Ridgeville where they lived, loved and enriched each other’s lives for 59 years. Larry made his living as a highly skilled carpenter. He joined the carpenters’ union and became a journeyman. He worked with several contractors and companies over the years with his employment at NASA being his favorite. In addition, he earned an Associate’s Degree in General Studies from Lorain County Community College on December 5, 1979. In the early years, Larry enjoyed travelling with his wife and two children. Several trips were made to Germany to visit his wife’s parents and relatives. There were camping trips up and down the east coast and into Canada with the family station wagon towing the pop-up Shasta camper. Later in life, additional trips were made to England, Germany, Hawaii, Mexico, New Mexico, Arizona, Wyoming, Alaska and California with his wife Elise. Additionally, Larry enjoyed playing baseball in his youth and boxing during his military service. He liked playing the harmonica, listening to Elvis Presley, Engelbert Humperdinck, Nat King Cole and German Folk Music. He would occasionally make his own wine. He could always tell a good Dad joke and be very charming and funny to his son’s and grandsons’ lady friends. Larry was very proud of both his children graduating from college and becoming productive, law abiding citizens. He loved his daughter for giving him such upstanding grandsons and would boast about his son’s service in the military. He would often take full credit for his children and grandchildren’s existence by announcing at family gatherings, “If it weren’t for me, none of you would be here!” This comment would make everyone laugh because he would often neglect to give his incomparable wife credit for the most important part of life creation. Larry new he achieved great success with marrying his wife Elise because she went above and beyond taking care of him and their children. He told her as much but not often enough. Larry lived for eighty-four years and departed this life on February 22, 2020. He was a much-loved husband, father, grandfather and friend to many. He will be very much missed. Larry is survived by his wife, Elise, son, David, daughter, Brenda Dawson, grandsons Jonathan, James, Andrew and Marc Dawson, his brother and sister-in-law Raymond and Barbara Fetcenko, and many loving nieces and nephews. A military funeral will be held in his honor at Ohio Western Reserve National Cemetery, 10175 Rawiga Rd., Seville 44273 at 10:00 am on Friday, March 13, 2020. A Memorial Service celebrating Larry’s life will be held at Saint John Lutheran Church located at 1140 West River Road. N. Elyria, Oh 44035 on Friday, March 13, 2020 at 12:30 pm. Instead of flowers, contributions to his memory can be made to Mercy New Life Hospice 3500 Kolbe Rd, Lorain, OH 44053 or Saint John Lutheran Church.

Lawrence (Larry) Fetcenko was born March 13, 1935 in Morris Township in Clearfield County, Pennsylvania to Mike Fetcenko and Mary (Verba) Fetcenko. He was the eighth child of ten siblings. He had a pleasant childhood in Pennsylvania and graduated... View Obituary & Service Information

The family of Lawrence "Larry" Fetcenko created this Life Tributes page to make it easy to share your memories.

Send flowers to the Fetcenko family.