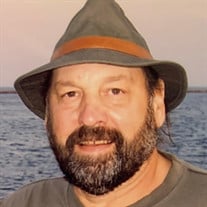 Joseph R. Bachna, age 65, of Vermilion, passed away on Monday, August 26, 2019 at Ames Family Hospice House in Westlake due to chronic illness. Joe was born in Cleveland and grew up in North Ridgeville. He graduated from Ridgeville High School in 1971 where he was a strong baseball, football and basketball athlete. He started working for the North Ridgeville Service Department in 1972 and later became the youngest Service Director of the city, supervising water, sewer and road crews. From 1990 until he retired in 2005, he worked for the Lorain County Engineers Department as a bridge inspector/coordinator. Joe was a consummate outdoorsman who loved hunting and fishing and was a skilled marksman and archer. He valued time with friends and family and often hosted back yard cookouts and clam bakes. He appreciated the little things in life like the taste of fresh peaches from the farm stand down the road or a pot of homemade soup. He entertained many a friend and stranger with his stories and sense of humor and his door was always open to anyone who stopped for a visit. Joe loved his home and property, but indulged his wanderlust from time to time. His hunting safari in Namibia, a road trip with family to Yellowstone and a family cruise to the Caribbean were a few of those highlights. Joe also enjoyed the occasional back road cruise on his red Harley Davidson Road King Classic. He is survived by his daughters, Kristie (Martin) Jochmann of Shorewood, WI, Jessica Bachna- Hartley of Grafton, OH ; grandchildren, AJ, Kemarah, Lilian, Sienna and Gus; siblings Kenneth (Jerri) of Elyria, James (Beth) of Elyria, Peter (Cheryl) Bachna of Strongsville and Mary Gross of Elyria; nieces and nephews Brian, Heather, Morgan, Gwen, Lindsay, Carly and Hannah. He was proceeded in death by his parents, Joseph and Catherine (nee Edelinsky) Bachna. Visitations will be on Saturday from 1PM until the time services at 3PM at Bogner Family Funeral Home, 36625 Center Ridge Rd., North Ridgeville. Rev. Andrew Hoover will officiate. Memorial contributions in Joe’s memory are suggested to: NRAExplore, an organization that supports the development of shooting sports for America’s youth.

Joseph R. Bachna, age 65, of Vermilion, passed away on Monday, August 26, 2019 at Ames Family Hospice House in Westlake due to chronic illness. Joe was born in Cleveland and grew up in North Ridgeville. He graduated from Ridgeville High School... View Obituary & Service Information

The family of Joseph R. Bachna created this Life Tributes page to make it easy to share your memories.

Send flowers to the Bachna family.