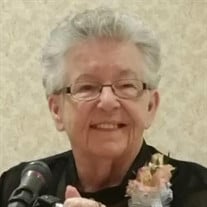 Helen W. Hurst (nee Walton), age 81, of North Ridgeville passed away Thursday April 2, 2020 at St. John Medical Center, Westlake. She was born in New York City and had resided in North Ridgeville the past 57 years after moving from Euclid. She earned a Bachelor of Science in Education from Fenn College (CSU). She was a School Teacher for 28 years, teaching at Wilcox Elementary, City of North Ridgeville., St. John Lutheran, Elyria, and Messiah Lutheran, Fairview Park. She was a member of Calvary Lutheran Church, Parma. Helen served on the Lorain County Board of Elections for the past 14 years. She was a former Cub Scout Leader and Boy Scout Badge Counselor. She was a former President of North Ridgeville Republican Club, where she was recognized with the Distinguished Service Award. She also was a recipient of the Outstanding Young Women Award from the North Ridgeville Jaycees. Being very active in the Republican Party at both the City and County levels, she served over 50 years on the Lorain County Republican Central and Executive Committees, most recently as the Executive Committee Chairman of the Lorain County Republican Organization for the past 12 years. She was a Republican Precinct Committeeman as well as the North Ridgeville Republican Area Chairman for over 50 years. Helen aided in many Republican Council, County Commissioner, Mayoral, State Representative, State Senate as well as various Judges and numerous State races in Lorain County and beyond for over 50 years. Survivors include her son James W. Hurst, daughter Allyson Hurst, both of North Ridgeville and her granddaughter, Kayleigh Hurst of Brookpark. She was preceded in death by her husband James in 2016 and her parents, James E. and Muriel M. (nee Kupferer) Walton. Due to the Covid 19 restrictions, a private graveside service for the immediate family will be held at Ridgeville Cemetery. A memorial service will be held at a later date. In lieu of flowers, memorial contributions are suggested to the American Lung Association www.lung.org or Calvary Lutheran School Scholarship Fund 6906 W. Pleasant Valley Rd, Parma, Ohio 44129 www.calvaryparma.org Arrangements are under the direction of Bogner Family Funeral Home and Cremation Services, North Ridgeville.

Helen W. Hurst (nee Walton), age 81, of North Ridgeville passed away Thursday April 2, 2020 at St. John Medical Center, Westlake. She was born in New York City and had resided in North Ridgeville the past 57 years after moving from Euclid.... View Obituary & Service Information

The family of Helen W. Hurst created this Life Tributes page to make it easy to share your memories.

Send flowers to the Hurst family.