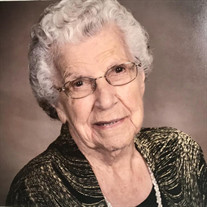 Geraldine M. Wilson (nee Elder), age 101, of North Ridgeville, passed away on Saturday, January 2, 2021, at the University Hospital Elyria Medical Center. She was born on October 15, 1919, in Thursday, West Virginia and has been a resident of North Ridgeville for more than 65 years, moving from Elyria. She was a member of the First Methodist Church in Elyria and its Monday Morning Quilters group. In her free time, also was very involved with the North Coast Needlers Club and Care Quilts, both of Bay Village, plus Delta Kappa Gamma - Sorority. She received her bachelor’s degree in Education from Fairmont Teacher’s College in Fairmont, West Virginia. She went on to work as a teacher in West Virginia before moving to Ohio during WWII, where she taught second grade in the North Ridgeville school on Center Ridge, then first grade at Wilcox and Lear North in North Ridgeville, and Windsor Elementary in Elyria. She and her husband, Shirley, built their home together in North Ridgeville. Geraldine is survived by her daughters Roberta Mae Alten of North Ridgeville and Betty Lee Wilson of North Ridgeville; sons Dennis (Shirley) Wilson of Cincinnati and James (Brenda) Wilson of North Ridgeville; 8 grandchildren and 13 great grandchildren. She was preceded in death by her husband, Shirley O’Neal Wilson; parents, Ota and Elsie (nee Conrad) Elder; brothers Conrad Coolidge Elder, James Blaine Elder, Byron Harding Elder, Dwight Eugene Elder, and Ota N. Elder; sisters Gladys Pauline Muzick, Glenda A. Styers and Wanda O. Goff. All services will be private. Private entombment will be in Resthaven Memory Gardens, Avon. A future celebration of Geraldine’s life will be announced at a later date.

Geraldine M. Wilson (nee Elder), age 101, of North Ridgeville, passed away on Saturday, January 2, 2021, at the University Hospital Elyria Medical Center. She was born on October 15, 1919, in Thursday, West Virginia and has been a resident of... View Obituary & Service Information

The family of Geraldine M. Wilson created this Life Tributes page to make it easy to share your memories.

Send flowers to the Wilson family.