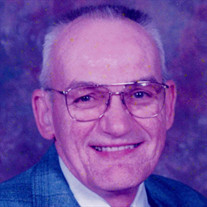 Gerald “Gerry” E. Mayer, age 86, of North Ridgeville, passed away Tuesday, September 7, 2021 at his home. Born on Cleveland’s West Side, Gerry overcame a severe hearing loss to lead what can be best described as a lifetime of serving and helping others. He was a forklift operator for United Screw & Bolt for 35 years, completing a career that him to retire at just 51 years of age. He then relocated to North Ridgeville. Gerry was an avid bowler throughout his life and until recently played in local leagues with his wife Maxine. Gerry attended Mass at St Julie Billiart every morning. His friends know he was a big sports fan, especially a Cleveland Indians and Browns fan. He regularly helped all his neighbors, and was very kind, generous and giving. He delivered meals on wheels in Lorain County for 23 years. He enjoyed traveling both domestically and internationally, going on cruises to Alaska, Hawaii, the Mediterranean, and many other ports of call. He is survived by Maxine (Matthews,) his wife of 24 years; son Edward (Joanne) Mayer of PA; grandchildren Genevieve and Nathan Mayer; stepdaughters Bonnie Faraci of TX; Marian Griest of N.C.; brother Dr. David Mayer of Reynoldsburg, OH; and many nieces and nephews, whom he would see often. He was preceded in death by his first wife Mary; parents Mary and Eugene Mayer; and sister-in-law Joan Mayer. Family will receive friends in the Bogner Family Funeral Home, 36625 Center Ridge Rd., N. Ridgeville, Friday from 10:30 a.m. until the time of a 12:30 prayer service preceding a 1:00 p.m. Mass of Christian Burial at St. Julie Billiart Church, 5500 Lear Nagle Rd., N. Ridgeville. Rev. Charles Ryba will officiate. Burial will follow at Resthaven Memory Gardens, Avon. In lieu of flowers, donations are suggested to the family.

Gerald &#8220;Gerry&#8221; E. Mayer, age 86, of North Ridgeville, passed away Tuesday, September 7, 2021 at his home. Born on Cleveland&#8217;s West Side, Gerry overcame a severe hearing loss to lead what can be best described as a lifetime... View Obituary & Service Information

The family of Gerald E. Mayer created this Life Tributes page to make it easy to share your memories.

Send flowers to the Mayer family.