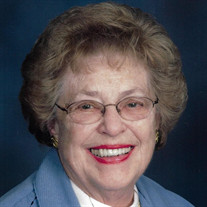 Della Ann Dorow, (nee Malanowski) of North Ridgeville, passed on her 88th birthday October 13, 2019 peacefully at her home. Della was born and raised in Elyria. She married the love of her life, Fred, moved to North Ridgeville, and helped him... View Obituary & Service Information

The family of Della A. Dorow created this Life Tributes page to make it easy to share your memories.

Send flowers to the Dorow family.