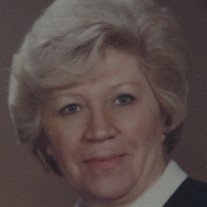 Beverly H. Scheidler (nee Hyde), age 82, of North Ridgeville, passed away on Sunday, June 30, 2019 , from terminal lung disease. She fought a good battle, and with the guidance of the Western Reserve Hospice staff, she found the road home in peace. Beverly lived in Avon most of her life, until moving to North Ridgeville 2012. Beverly graduated from Avon High School, went to work as other women did in that era as a secretary. Beverly met Dale Scheidler in St Joseph’s Church in Avon Lake. They were married in 1956 at St Mary’s of the Immaculate Conception Church in Avon. Beverly co-owned and operated the family business, Hyde’s Greenhouse in Avon for many years, retiring in 1985. Dale and Beverly raised 5 children, and together were able to see 11 grandchildren grow. Dale passed away in 2011 and Beverly was able to see a next generation of 9 great grandchildren go to elementary and high school. Beverly was very talented, when her children were younger she would sew many of their holiday apparel. Later, she crocheted doll clothing for her grandchildren and great-grandchildren, and continued to express her talents through beautiful embroidery and ceramics. Beverly found achievement within herself to battle the tough days of illness and cherish time with loved ones and friends. Survivors include her daughters, Kathleen (Rick) Novak of Avon, Pamela (Steve) Novak of Wellington, Deanna (Steve) Ferry of Valley City; sons, David Scheidler of LaGrange, Dale (Sue) Scheidler of Albuquerque, New Mexico. Grandchildren: Dan, Amy, Kevin, Yolandi, Tiffany, Ryan, Amanda, Rob, Chris, Patty, Michelle Jared, Breann, Ashley, Gabrielle, Andrew and McCallah. Great-grandchildren; Cody, Robbie, Brooke, Ben, Madison, Natalie, Isabella, Sam and Jonathon. Brother, William (Candy) Hyde of Avon. She was preceded in death by husband, Dale in 2011; sister, Bonita Hyde; great-granddaughter, Eva Szegze; parents, William and Margaret (nee Kovalcik) Hyde and sister-in-law Lucretia Hyde. The family will receive friends from 9 AM until time of memorial service at 10 AM Friday July 12, 2019 at Bogner Family Funeral Home and Cremation Services 36625 Center Ridge Road North Ridgeville. Burial will follow in St. Mary of the Immaculate Conception Cemetery, Avon. The family wishes to express their appreciation to the caring staff of Hospice of the Western Reserve and the Woods on French Creek for their loving care of Beverly. In lieu of flowers memorial contributions are suggested to Hospice of the Western Reserve 17876 St. Clair Ave, Ohio Cleveland 44110. www.hospicewr.org

Beverly H. Scheidler (nee Hyde), age 82, of North Ridgeville, passed away on Sunday, June 30, 2019 , from terminal lung disease. She fought a good battle, and with the guidance of the Western Reserve Hospice staff, she found the road home... View Obituary & Service Information

The family of Beverly H Scheidler created this Life Tributes page to make it easy to share your memories.

Send flowers to the Scheidler family.