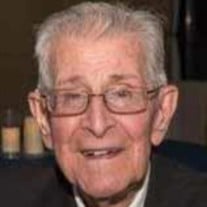 Anthony Luciano Cioffoletti, age 91, of North Ridgeville, peacefully passed away on Sunday, April 24, 2022 after a sudden illness. He was born on November 18, 1930 in Long Island, New York and was a U.S. Army Veteran of the Korean War. He was a very active member of and past Junior Vice Commander and Honor Guard member at V.F.W. Post 9871, North Ridgeville. He has been a resident of North Ridgeville for the past 28 years, moving from Staten Island. He worked as an Import/Export Manager for D.F. Young, retiring in 1992 after 40 years of service. In his free time, Anthony and his wife Annie enjoyed traveling, concerts, dancing and being with family and friends. Tony was a diehard New York Yankees and Giants fan. He loved to bowl, and was a bowling coach as well as a member of the Staten Island Bowling Hall of Fame. The summer months would find him tending to his garden, pool, and entertaining at home. He is survived by his two sons Anthony (Donna, nee Sanza) Cioffoletti of Staten Island, New York and Dan (Lee Ann, nee Kinley) Cioffoletti of North Ridgeville and his daughter Donna Cioffoletti of North Ridgeville; grandchildren Allison, Aprile, Amy, Alicia, Anthony, Brittany and Bryan; great grandchildren Ciara, Roman, Braylan, Brielle, Anthony and Dante; his brother Danny (Diane) Cioffoletti of New York; many nieces and nephews. Anthony was preceded in death by his wife of 55 years, Anne; parents Donato and Alexandra (nee Pizzalante) Cioffoletti; sister Marie; brother John. Funeral Service Friday, April 29, 2022 at 6:30 p.m. in the Bogner Family Funeral Home, 36625 Center Ridge Road, North Ridgeville, where family will receive friends on Friday 3:30 p.m. until time of service. Rev. Bob Franco will officiate. V.F.W. 9871 will perform a service at 5:30 p.m. A celebration of life will follow at the North Ridgeville V.F.W. Post 9871 with family and friends. Private interment with Full Military Honors will take place at a later date at Ohio Western Reserve National Cemetery, Rittman. In lieu of flowers, family suggests donations be made in Tony’s name to V.F.W. Post 9871, 6805 Lear Nagle Road, North Ridgeville, Ohio 44039.

Anthony Luciano Cioffoletti, age 91, of North Ridgeville, peacefully passed away on Sunday, April 24, 2022 after a sudden illness. He was born on November 18, 1930 in Long Island, New York and was a U.S. Army Veteran of the Korean War. He... View Obituary & Service Information

The family of Anthony L. Cioffoletti created this Life Tributes page to make it easy to share your memories.

Send flowers to the Cioffoletti family.